Luke Bryan, "Country Girl (Shake It For Me)" 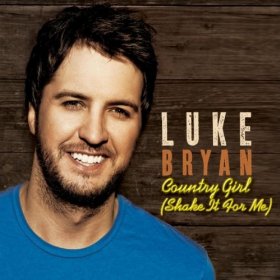 After scoring back-to-back number one hits with his previous singles, Luke Bryan is starting to become one of country radio’s most popular artists. After sending three songs off his recent album, Doin’ My Thing, to radio, Bryan is now releasing a new song from an upcoming project. Does “Country Girl (Shake it for Me)” have what it takes to nab Luke a third consecutive number one hit?

I might lose all credibility for admitting this but I actually like this song. Even though it has all the makings of a song I should hate (semi-rapping, pointless lyrics, a loud-ish production), I can’t help but sing and dance along to this song. I think it takes a great artist to be able to pull that off and I think Luke is one of those artists. He can turn any song, good or bad, into a hit and he’s proven that with songs like “All My Friends Say,” “Do I,” “Rain is a Good Thing,” and “Someone Else Calling You Baby.”

I think it takes all of Luke’s personality and style to turn this mediocre ditty into something that fans can enjoy. Once again rap (or in this case, semi-rap) has found its way into country music, but this time I think it actually fits the song. When other artists (ahem, Jason Aldean) infuse the rapping thing into their songs, it always feels like it doesn’t fit and isn’t the correct route. On “Country Girl,” I think it suits the production, the lyrics, and that artist’s personality. Luke does an excellent job in delivering the song and infusing plenty of personality and charm into the song.

I’ve always pointed out that Luke is one of those rare artists who possesses the ability to pull off a country-pop production that is unmistakeably country and he shows that again on this song. However, I think, at times, the production goes a little overboard with everything that it has going on from the annoying drum beat to the fiddle and numerous guitar riffs…it’s all just a bit much. But again, somehow Luke makes it work and is able to make a sure-fire hit out of it.

This song doesn’t have much going for it, which is why it shouldn’t work…for any artist. But, again, Luke manages to make it “work” and will turn it into a hit. Considering that this is the fastest rising single of Luke’s career, I think this will be one of the summer season’s biggest hits and will no doubt be the singer’s next number one single.