With the GRAMMY awards only days away, I figured it was time for me to sit down and make my predictions for who I think will walk away with a coveted golden Grammy. Here are my predictions for the country categories at this year’s awards show…here we go!!

Seeing as it’s nominated in the all genre category, I’m picking pop princess Taylor Swift to take home the award. The album has also been a massive success at retail outlets and I don’t see any of the other 4 nominees taking her down. However, I would prefer to see Urban or Womack take the award, though it’s highly unlikely.

This category is a two horse race between country divas Carrie Underwood and Taylor Swift. Both songs performed very well at country radio, with Underwood scoring a number 1. Considering the award is supposed to go to the best vocal performance, I would pick Underwood’s “Just a Dream.” However, Taylor has had a phenominal year and has scored 8 nominations at this year’s ceremony so the recording academy could pick her. I’m going with my gut and I’m going to pick Grammy darling, Carrie Underwood to edge out Swift.

This category is filled with 3 songs that had chart success while the other 2 have been critically acclaimed. This is a tough category because there are no standouts or frontrunners. If I can pick two people to choose between, they’d be Urban’s “Sweet Thing” and Strait’s “Living for the Night.” Urban has won in this category before while Strait has had plenty of nominations but hasn’t won in this category. I’m looking towards Urban to get the win based on the fact that his song was probably heard the most out of the 5.

This category is filled with songs that have had massive success on the charts, a rarity for the academy to have. But, it comes down to 3 songs and those are Lady A’s “I Run to You,” Zac Brown Band’s “Chicken Fried,” and Sugarland’s “It Happens.” Seeing as it was named the CMA Single of the Year, I think Lady Antebellum has enough momentum to claim their first Grammy award for the smash number 1 hit. But, don’t count out Sugarland since they too have had some momentum coming in and they won this award last year with their smash “Stay.” But I give the edge to Lady A.

This category has 5 nominees but only 2 have a chance of walking away with a statue. Mega-stars Brad Paisley and Keith Urban collaborated on one of the year’s biggest hits and bring big name recognition to the category. On the other hand, Carrie Underwood and Randy Travis bring the best song and vocals to the category. Seeing as the Grammy’s usually lean towards traditional country, I think Underwood and Travis could walk away with it.

This award is yet another two horse race. I think it comes down to Lady Antebellum and Taylor Swift’s songs. Overall, I think Lady A’s “I Run to You” is the better song and had more success in the past year than Swift’s “White Horse.” However, with Taylor having 8 nominations, I think the Grammy’s could just give it to Swift. I’d prefer to see Lady A win but I’m not going to be suprised if Swift wins. 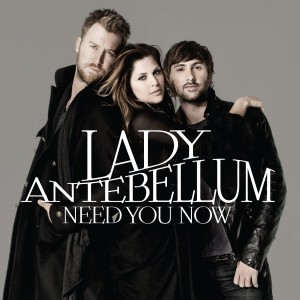 Country music’s reigning Vocal Group of the Year, Lady Antebellum, released their highly anticipated sophomore album, Need You Now, on Tuesday and it’s no doubt going to rake in some big numbers during its first week.

Having listened to the album online before it was officially released, I had a fairly good idea what to write about. However, like any other album, it takes more than one listen to fully review an album. My first impression of the album was that it is a continuation of their platinum selling debut album. The group brings their unique sounds to every song on the album and continues to raise the bar in how to do country-pop right.

The song that stood out the most to me was the album’s highlight, “Hello World.” A thought provoking song about being reintroduced to the world after seemingly leaving it mentally. Band member Charles Kelley takes the lead on this song and his voice adds so much to the song. Sung entirely over a piano and strings, the song builds and builds to a big climax where the narrator sees himself with a family after finally learning to see the small things in life. The production is fairly simple with just the piano and strings but it could be toned down just a bit at the end where the strings take over in a bit of over dramatism. I would love to hear this song as a single but it would be difficult seeing the song is over 5 minutes long.

Another instant favorite of mine was the pop leaning “Love This Pain.” A song about loving someone even though they continue to hurt you over and over. Once again, Kelley takes the lead on this one and its a perfect fit for his voice. He brings the soul and emotion needed to pull off a song like this. In fact, I don’t think I can see anyone but Lady A pulling this song off seeing as it falls into their realm of catchy hooks and great melodies. Look for this to be one of the singles to be released off this album.

Speaking of great hooks and catchy lyrics, the pop-country duet, “Stars Tonight” is another great one off the album. It’s a song about going out and having a great time and becoming “stars.” The beat is fantastic and it’s just a great feel good song! One you can crank the volume up and sing as loud as you can! I know I’ve been doing that already! The song could deal without the group “yeah’s” at the end but then again it doesnt take away from the song…it only makes it more fun!

The album as a whole is a solid follow-up to a massively successful debut album. It’s filled with tender ballads and plenty of uptempo songs. The flow of the album is great and the production, though very country-pop, is just as good. If you’re a fan of mainstream country, this album is a must have. Look for Lady Antebellum to continue their rise to country superstardom with this fantastic album!

Single and Video Review: "’Til Summer Comes Around" Keith Urban

Throughout all of his career, Keith Urban has been one of the best ballad singers in country music. In fact, most of his best singles have been heartbreaking ballads such as “Tonight I Wanna Cry” and “Stupid Boy.” His new single, the heart-wrenching “‘Till Summer Comes Around,” is no exception. In this tune, Urban sings about a summer romance that leaves him longing for his love interest to come back after she’s left at summer’s end. However, like most songs that deal with stories like this, the girl never comes back and leaves the heartbroken male with only the empty boardwalk where they’d once had their happier moments.

What makes this song so great is Keith’s ability to make you believe that he’s gone through the same experience the main character is going through. He has the uncanny ability of making you feel the emotions that the character is going through. His grief-stricken vocal forces you to feel the emotions and heartache that he does. Along with his superb vocals, the haunting and somber guitar melody only fuels the emotional aspect of the song. The production as a whole is fantastic which makes this one of the highlights off of his recent album, Defying Gravity. Look for this song to climb the charts just like his previous singles have.

Video Review
CMT just recently premiered the video for Urban’s “‘Til Summer Comes Around” so I figured it would be a great first video review for the site.

The video begins with Urban left in an empty field thinking of the summers when he was happy and in love. He stands and stares at the still carnival rides and empty boardwalk where they’d spent most of their time. Flashbacks of them riding the rides and showing their love for one another go through his head, but the reality is he’s left standing alone on the boardwalk.

Director Noble Jones does a fantastic job at bringing the song to life. However, there could’ve been a better concept than showing Keith at a boardwalk mainly because it feels almost like a copy of Kenny Chesney’s “Anything but Mine” video. Then again, the two songs deal with the same subject matter so it’s easy to want to do the same concept for the video. I also could’ve done without scenes of Keith singing on the beach because they seem a bit out of place.

Though the video has its flaws, I think its very well-done and does a great job at bringing the images in the song to life. Here’s the video, taken from cmt.com. What’s your take on the song and video?
http://media.mtvnservices.com/mgid:uma:video:cmt.com:468508

I met Lady Antebellum for the first time back in September of 2008 when they performed in a local high school auditorium just one day after learning they’d been nominated for their first CMA awards. Back then, I knew it was only a matter of time before they’d become one of country’s most popular groups. However, I never thought, a year and a half later, they’d be named the CMA’s Vocal Group of the Year and spending 5 weeks atop the country singles chart. But, Charles, Hillary, and Dave have proven they’ve got what it takes to take country music by storm. To continue their rise to superstardom, they’ve released the follow up single to their smash, “Need You Now,” and it’s another sure fire hit.

“American Honey” finds Lady A using a more country sound to deliver a story of wanting to revisit the days of innocence in a person’s life. The production is great with plenty of country sounds that have been all but silent in recent country singles. The strings at the end of the song add an even more feel good emotion to an already upbeat song. Having Hillary take the lead vocals was an excellent idea as Scott brings her raspy, soulful voice to the song. Not to be outshined, Charles and Dave bring their best vocals while harmonizing with Hillary throughout the song. Look for this single to climb up the charts just as fast as their previous ones have.

(Lady Antebellum’s sophomore album, Need You Now, hits stores on January 26 and you can see them live on Tim McGraw’s Southern Voice tour 2010.)