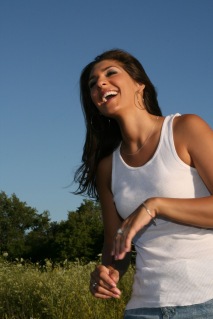 For the second installment of our Indie Spotlight featuring Danielle Car we are getting to know Danielle a little bit better by asking her a few questions. Find out which artists she considers influences as well as how she feels about songwriting and the recording of her very own EP in our interview with Danielle!

First off, coming from Detroit, how did you manage to get into country music? Detroit isn’t exactly known for producing country music stars.

Keen observation.  We basically have a radio station and a Toby Keith restaurant, but I wouldn’t have it any other way.  I’m a Detroiter born and raised.  The richness of our cultural and musical legacy lends itself perfectly to new creative endeavors regardless of genre or medium.  Also, I feel traditional country music themes are universal and not limited to location. Tammy Wynette never specified where she wanted to stand by her man.

Who do you feel are some of your biggest influences and who do you consider your heroes in the genre?

Growing up, I ultimately identified with whomever Mom had on the turntable.  Glen Campbell, Kenny Rogers, Gene Pitney, John Denver, Neil Diamond…  Though Charlie Rich’s lighter may not agree, some of those artists really brought a different style of country music to the masses and ushered in throngs of new fans including a little Italian kid from Metro-Detroit. As far as current influences go, it wasn’t until my late teens that my discovery and subsequent obsession with Dwight Yoakam and Queen entered the equation.  For Dwight, I don’t know that “hero” would be a fitting term (not too sure I have any of those), but inspiration, unknowing teacher and object of my desire may be more appropriate labels, if we’re givin’ ‘em out! Also, I really admire the path Jack White has taken with regard to music.  He’s managed to forego labeling himself in favor of asserting his creativity while maintaining incredible success.

Of those influences, who would you most love to sing a song with? Are there any artists outside of the country genre you would partner up with for a song?
“Dwight and Dani” has a nice ring to it, eh?  I’ve been singing background vocals with Dwight for years now (if you count harmonizing in the car) and would be honored to share a stage with the man himself. I would also love to duet with Jack White…something along the lines of June & Johnny’s “Jackson”…yeah, we’d have to share a microphone…real close…. sweat meandering slowly down his…oops, sorry, I forgot where I was for a second.
When did you discover songwriting? What are your favorite songs you’ve been able to record that you’ve written?
Writing is something I’ve been doing since childhood.  My brother had a ¾ sized acoustic guitar and the rest is history. Finally recording “Walk of Shame” was an accomplishment.  I’d been singing it 4 days a week for over a year at the honky-tonk and enjoyed the spirited response it always garnered, so finally laying it down and having it be a success is a dream come true.
How does it feel to have your singles featured on the Promo Only releases along with singles by superstars like Kenny Chesney, Alan Jackson, and newcomer Easton Corbin?
Speaking of dreams coming true…I’m absolutely thrilled to see a bit of my plan come to fruition.  It’s difficult at times to convince folks you’re worth listening to when you don’t fit the usual criteria for country music.  I’m from an unlikely country music hub and don’t have the benefit of a label’s promotional powerhouse behind me, so the fact that an esteemed outlet like Promo Only sees fit to put my music on the same disc as these legendary talents is an unbelievable vote of confidence….so pin a rose on my nose.
Speaking of songs you’ve recorded, tell us a little about the EP and its songs.
The EP is basically a soundtrack to what I’ve seen and lived over the past few years.  In “Walk of Shame”,  I’m merely the narrator of a scene I’d witnessed night after night playing shows at the Diamondback Saloon.  Good times, flowing nectars, horny people…perfect for a song! “Drive My Car” is a blues number and a re-telling of events between me and a certain egomaniacal country star who came through the club one night to play a few songs…don’t ask, I’ll never tell.  “Biggest Mistake” is a very personal song for me and one I’m sure folks can relate to.  “Hazard to My Health” details the physical changes one can incur upon falling in love…or like…or lust.  “Pretty Please” just rocks…it’s one of my favorite songs, plain and simple.
How often do you perform live? Have you had the chance to share the stage with any country stars?
I’ve fronted the house band of southeast Michigan’s biggest and best honky-tonk for four-and-a-half years…that’s over 900 shows, 7,000 songs, 1,800 fiddle solos, and 2,000 guitar riffs…I’m tired.  I’m taking this opportunity to really hunker down and support my EP.  I’m serving up these tunes as my little cheese and cracker tray to see if anyone’s hungry for a main course.  I’ve shared the stage with Eric Church, Tracy Lawrence, Trent Tomlinson…lots! It’s always a blast when you can jam with some talented music folk passing through!
When you do perform live, what is your favorite cover (other artist’s) song to perform?
I try to choose cover tunes very carefully.  As a new artist, I want to make sure folks hear my voice and point of view, so I usually relegate covers to heritage crowd pleasers and classics.  Honky Tonk Women by The Stones, Folsom Prison Blues, Love Hurts…
Right now, what is your favorite country song? Album?

Hmmm, how ‘bout this…here are the next 6 songs on my iPod as we speak:

*The Comedian (Roy Orbison…I could cry just thinking about it)

Some are country, some aren’t…the bottom line is great music is great music.
Where do you see yourself in five years?
Good question…if I had a crystal ball, I’m sure I’d see music everywhere…playing it, singing it, writing it…  hopefully a couple of bambinos running around the house to share it with…and a tray full of cannoli to celebrate living life and creating my music on my own terms.
There you have it! I’d like to thank Danielle for taking time out of her schedule to answer our questions! In the next few days, we’ll finish our second Indie Spotlight with a review of the EP Danielle discussed with us!

6 responses to “Indie Spotlight: Getting to Know Danielle Car”