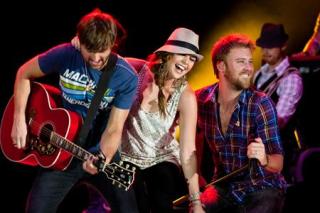 Country superstars and CMA Entertainer of the Year nominees Lady Antebellum brought their first headlining tour, the Need You Now 2010 Tour, to Phoenix’s Comerica Theatre for a special Halloween show. Judging by their performance, the trio proves to be a frontrunner for the Entertainer prize at this month’s CMA awards.
Since the announcement of the CMA nominees, all eyes have been on the Entertainer of the Year category and the inclusion of country superstars Lady Antebellum. During their performance last night, they proved they know how to hold their own when it comes to entertaining a crowd and headlining their own tour.

After the theatre’s curtain revealed the trio, they went into an acoustic version of their first number one hit single, “I Run to You.” Mid-way through the song, the band kicked in and never stopped rocking the entire night. The trio went straight into “Stars Tonight” and “Love This Pain,” both songs are cuts on their triple-platinum Need You Now album. The trio continued to rock the theatre by offering earlier songs like “Love’s Lookin’ Good On You” and “Long Gone.” The crowd got to show off their singing skills on the band’s number one smash, “American Honey.” The best performance of the night followed as the band did a bluegrass version of “Something About a Woman” which included an upright bass, mandolin, acoustic guitars, and plenty other bluegrass sounds.

After hyping of the crowd with uptempo numbers, it was time for the band to slow down the tempo. The band offered the tender ballad “When You Got a Good Thing,” which showed off Charles’ soulful voice. About halfway through the trio’s hour and a half set, Charles stepped off stage to allow bandmates Hillary Scott and Dave Haywood to have their time in the spotlight. Hillary performed a toned down version of Bonnie Raitt’s “I Can’t Make You Love Me” accompanied by only a piano and the harmony of Dave. She then went into the song “Ready to Love Again” which closes their Need You Now album. Once she finished, she too stepped onto the side stage to allow Dave Haywood a chance to perform the song he and Charles wrote for Luke Bryan, “Do I.” Charles then returned to the stage to perform the group’s latest single, “Hello World,” which was one of the night’s best performances.

Once the band finished, it was time to rock the crowd again with songs like “Perfect Day,” and chart-topping singles “Our Kind of Love,” “Lookin’ For a Good Time,” and “Love Don’t Live Here Anymore.” The trio ended their main set with their breakout smash single, “Need You Now.” After a quick break, the announcer came on the speakers to announce that three country music superstars were performing as special guests and introduced Reba McEntire and Brooks & Dunn. Out of the side stage came Hillary dressed as Reba, Charles dressed as Ronnie Dunn, and Dave dressed as Kix Brooks. They performed the hit “If You See Him, If You See Her” to end the night (you can view the video of their encore below).

The setlist was perfectly balanced and included nearly every song off of Need You Now as well as fan favorites from their debut album, Lady Antebellum. The show’s stage production was extremely simple and proved that the trio doesn’t need gimicks like pyrotechnics, or flying over the crowd to provide an entertaining show. Instead, they relied on their talent and personalities which proved to be enough. What makes Lady A one of the best entertainers in today’s country music is the fact that they obviously love doing what they’re doing and they love being on stage every night. Out of the 10 country concerts I’ve attended this year, this was by far the best one and I’ve seen three other Entertainer nominees this year (Keith Urban, Brad Paisley, Zac Brown Band). Don’t be surprised come November 10 because that could be the night this mega-trio is crowned Entertainer of the Year.

Along with Lady A, newcomer David Nail was also on the bill and provided a great 30-minute set that included his debut smash hit, “Red Light,” as well as his current single, “Turning Home.” Nail proved to be one of country’s best new voices and could see a bright future in years to come.