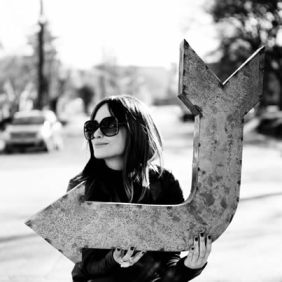 Since bursting on the scene with immense critical acclaim, country cutie Kacey Musgraves has become one of the most authentic artists in today’s country music. Her debut single “Merry Go ‘Round” was included on countless lists of best singles of 2012 and she’ll no doubt be appearing on Best of 2013 lists with the follow-up single, “Blowin’ Smoke.” However, it’s the singer’s latest single that has everyone talking.

Being a beautifully crafted song, “Follow Your Arrow” is creating a lot of unneeded raucous within the country music community. Written by Musgraves along with Shane McAnally and Brandy Clark, the single tackles topics that have traditionally been “no-no’s” in country music. With lines displaying approval of being gay and smoking joints, Musgraves is taking a risk in releasing this to country radio.

However, controversy aside, this is without a doubt the best single to hit country radio in years. The songwriting is incredibly clever yet serious enough to convey the song’s inspirational message. The verses include brilliant plays on words as proven by the opening line: “if you save yourself for marriage you’re a bore, if you don’t save yourself for marriage you’re a hor…rible person.” The chorus masterfully conveys the overall message of the importance of being who you are. In a world filled with certain ideologies, it is refreshing to be told that is okay to go against the grain and follow your own arrow.

To some, Kacey Musgraves is being hailed as a pioneer within the genre. In my opinion, there is no better way to describe the singer. Country music has been longing for an artist to create music that is real, authentic, genuine, and relatable. Kacey fits the bill perfectly. She speaks her mind through her songs and isn’t afraid to express how she feels. It’s no wonder Musgraves is up for six CMA awards on Wednesday night. It will be a shame if she doesn’t garner at least one win.