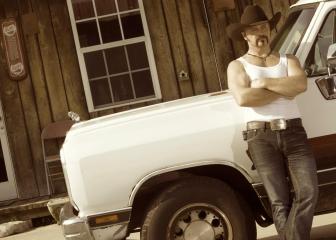 Continuing our Indie Spotlight featuring Tim Culpepper, the singer recently answered some questions via email. Learn more about what the traditionalist thinks about today’s country music, what you can expect on his debut album, and what country classic he wishes he could’ve written.

I was super excited and fortunate enough to be contacted in regards to you and your video for “Ghost.” When I began listening to the song I was immediately blown away by your voice, which has hints of country legends like Keith Whitley, George Jones, and Randy Travis. Who are some of the artists that have helped shaped you and your style of country music?

As a matter of fact, you just named 3 of my biggest influences. Keith Whitley, George Jones, Randy Travis, and add to the list, Gene Watson.

Coming from a family that is heavily involved in country music and entertainment, was there ever a time when you weren’t interested in becoming a country music artist?

Not a time that I can recall.

Did your parents ever discourage you to stay away from the business?

My parents were always very supportive.

Your debut single “Ghost” is a rather traditional leaning song, is that the style of country music you prefer?

I absolutely couldn’t imagine any other style of country music for myself.

What are your thoughts about the direction today’s country music is headed?

As far as the direction of where country music is headed, those of us working within the industry have a little more unique perspective. For instance, what people see & hear today doesn’t necessarily represent the entire picture of what you may see in the coming weeks & months. For example, just as it took me 2 yrs to complete this project before coming to market, I see and hear a variety of male & female artists with a similar style completing their projects & preparing to bring them to market.

Speaking of that project, you recently recorded your debut album, Pourin’ Whiskey on Pain, what can listeners expect to hear on the album?

Consistency. For Instance, If you like the song Ghost & the new single, Pourin’ Whiskey on Pain, which is the title track, then you should enjoy the other 11 of the 13 songs.

Which of the album’s tracks is your favorite?

It’s hard for me to pick a favorite, but if I must, I would say ‘Pourin’ Whiskey on Pain’ due to the fact that it was the song that got me my deal and brought me to this point.

Country songs always deal with a variety of different topics and themes. As a songwriter where do you find your inspiration?

Life in general is my inspiration

How long have you been writing your own songs?

I’ve been writing since I was a teenager.

If there’s one song you wish you would have written, what is it and why?

As far as the one song I wish I would’ve written… There are so many great country songs, but if I had to pick one, it would have to be ‘He Stopped Loving Her Today’.  The song paints a perfect detailed picture of love, loss and true devotion while drawing the listener in and moving them with the sadness in the lyric and captivating them with its haunting melody. Not to mention the unique delivery of the song by the one and only George Jones. To me, it embodies all the characteristics of the ultimate country love song.

Speaking of George Jones, I read in your bio that as a kid you spent time with other country legends like Marty Robbins, Johnny Cash, and Hank Williams Jr., did you ever get offered advice, if so, what is the most important thing you’ve taken from them?

Since I was a toddler when I was exposed to these Legends, if they gave me any direct advice, I don’t recall it. But I feel like I gained a wealth of knowledge from my dad who shared the stage and made music with these folks. As far as advice that I was given from my father from having known these legendary artists personally, His advice to me was, “Son, just make honest country music. Don’t set out to be some sort of superstar or legend, just work to be the best artist you can be and let history decide the rest.”.

Do you think it’s important to keep those sounds alive, even when country’s become more “pop?”

Absolutely! Country music, artists and fans alike…have always been kinda like a big ole family tree. The different members of the family may not all like the same sound or prefer to produce the same sound, but as you said, it began with the roots and a tree separated from its roots won’t survive long.

What can we expect in the future from Tim Culpepper? Any plans for hitting the road?

As a matter of fact, instead of doing the standard, usual radio tour, the label and I have decided  to embark on what we are calling a music awareness campaign , where we are going to spend the next 12 months, through the run of this next single, ‘Pourin’ Whiskey On Pain’, to visit as many towns and communities across the country as we can. The idea is, while we are becoming more familiar to country music radio, we’re going to make sure the PEOPLE become familiar with myself and the music. And to do this, we’re gonna go out and hug as many necks, shake as many hands and do as many performances as we can.

There you have it! Once again you guys can check out Tim’s website, Facebook page, Twitter, and watch his video for the single “Ghost” below! We’ll have a review of the single in the next couple days!