Artist to Watch: The Farm, The New Entertainers

Country music has a new trio that has enough potential to give Lady Antebellum a run for its money. This new group goes by the name The Farm. Comprised of three veterans in the music industry, this group has already taken the country charts by storm with its debut single, “Home Sweet Home.” But what impresses me most about this talented trio is its onstage presence which is why I’ve dubbed them, the new entertainers.

Why ‘The New Entertainers?’: The group’s highly energetic shows are some of the best to come from a new artist 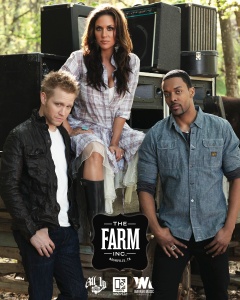 The group’s debut single, “Home Sweet Home,” is one of the most down-home, country-pop songs I’ve ever heard on country radio. The song’s production revolves around a killer fiddle hook that does just that…hooks you in. From the second Nick Hoffman’s bow hits the strings of his fiddle, you’re treated to a stellar sound that hasn’t been heard since Charlie Daniels was on the radio. Throw in the guitars of Damien and Krista and you’ve got yourself one heck of an energetic country-pop production. That same energy is matched by the incredibly upbeat vocal performance the group turns in. Everything from the vocal solos to the fantastic harmonies is filled with such personality that it makes the song even more infectious. It’s no wonder the single has already cracked the top 25 of the Billboard country chart.

The trio collaborated together on the song’s lyrics about country living. While using some fantastic imagery, the song serves as an ode to the preference of a backwoods, country lifestyle over city living. “I’ve been dreamin’ Carolina, catchin’ crawdads by the creek, but I’m stuck here in this prison cell full of city streets,” sings Damien during the song’s opening verse. The chorus is all about wanting get out of the city and back to where you can breathe which is of course only found at “home sweet home.” It’s a rather clever take on the overly done “I’m proud of my country lifestyle” songs.

If you’re wondering if the group has the capability to bring the same energy found in the song to a concert stage then I’m here to tell you that yes they do. I was able to see them perform a couple weeks ago at KMLE Country Thunder in Florence, Arizona. From the very first song the group commanded the stage and the crowd with their energetic stage presence and, at times, wild stage antics. The crowd was treated to everything from stellar musicianship (Nick on the fiddle and Damien and Krista on the guitars) to incredible vocal performances.

Though all three members were able to show off why they’re veterans when it comes to performing, the stand-out was definitely Nick Hoffman who often took to the stage’s catwalk to tear it up on the fiddle. Aside from “Home Sweet Home,” my favorite song of the trio’s set was their cover of Alabama’s “Dixieland Delight” which had the entire crowd on their feet clapping or dancing along. I don’t think I’ve ever seen a new country act exhibit such an enormous amount of energy and stage presence like The Farm does. I think we’ll be seeing a lot more from this group, and like I said they could give the today’s top groups a run for their money….The Farm is that good!

If you’d like to know more about this talented group of individuals then check out their website here and you can purchase “Home Sweet Home” on iTunes now. You can also view the song’s video below.