Me and Country Music: George Strait

Since 2009 I’ve written all about how I feel about country music from new singles, albums, videos, concerts and basically anything else related to the genre I so dearly love. But other than my opinions, I don’t think y’all know about who I am as a person and how I’ve become so passionate about country. That’s where this new feature comes in. Me and Country Music will basically chronicle my life by recollecting how specific artists, songs, and even albums have influenced me. From the many happy, joyous memories to the ones that weren’t so joyful, country music pretty much led me to who I am today. So I hope you enjoy these little blurbs about my life and who I am as a person.

Now I don’t know about many of you, but growing up George Strait was always a big part of our household. Both my mother and brother had stacks and stacks of Strait albums. We had some of his earlier albums on vinyl, some we had on tapes, and some we had on CD’s. I’m pretty certain we own every single one of his 37 albums including live albums, soundtracks, and Christmas albums. I even have all the discs of the Strait Out of the Box boxed set on my iPod. His music isn’t the only thing we’ve accumulated. Everything from Christmas ornaments, blankets, sweaters, t-shirts, pillows, mugs, and even a full size cut-out were things you could find in our house. Most of it belonged to my mom and could be found in her and my dad’s room.

Being born in 1988, I wasn’t fully invested into music until the mid-90’s when I was about 6 or 7. But that didn’t mean I was unfamiliar with Strait’s early tunes. Big hits like “Unwound,” “Amarillo by Morning,” and “The Chair” were all songs that were a part of my earliest music memories. There were also family favorites like “Chill of an Early Fall,” “Easy come, Easy Go,” and “If You’re Thinking You Want a Stranger (There’s One Coming Home)” that helped me gain an understanding of Strait’s earlier discography. It wasn’t until his 1996 album, Blue Clear Sky, that I began realizing just how awesome George was. Songs like the title track, “Carried Away,” “I Can Still Make Cheyenne,” and “She Knows When You’re on My Mind” sparked an interest inside me. In fact, I would play the album on our living room stereo system whenever I had to do chores on the weekend or after school. I would even put on little concerts, privately of course, where I would use flashlights as microphones. After that album, I made sure I listened to every release from the superstar.

Strait’s music wasn’t the only big influence in my life. Around the same time he sparked my interest, my mother brought home a little 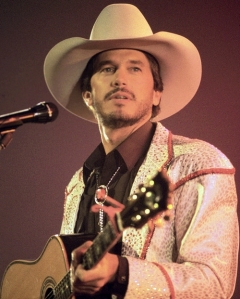 VHS (which we still own) called Pure Country. I’m pretty sure I knew every single line of the movie and I seemingly found myself consumed by the lives of Dusty, Lula, Buddy Jackson and Harley Tucker. To this day my family and I still recall some of the movie’s scenes. Scenes about the dancin’ chicken, the breakfast scene with Earnest Tucker (“sure is good…”), and of course the movie’s most famous scene where Dusty confronts his impostor Buddy Jackson (“Go on…get your ass outta here!”) are always brought up when we hear songs from the movie. There are also a couple embarrassing moments in my life that my family still won’t let me live down. Mainly, my reenacting of the scene’s final performance scene. I would always act along whenever I would watch it, right down to Harley’s emotional reaction to “I Cross My Heart.” I have to admit, I apparently was a weird kid.

When it comes to my family and their love of, or borderline obsession with, The King, I am actually extremely grateful because without it I never would’ve been able to see him or the multiple country acts in concert. Since my family would always attend his concert tours every year, I was lucky enough to go as well even though I would always fall asleep before George got on stage (hey! keep in mind I was like 6 or 7!). But my favorite memories were always of his George Strait Country Music Festival tours. 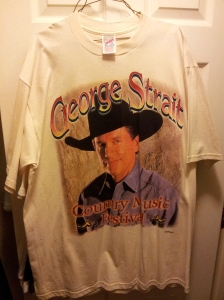 The first time we saw the festival was at the Desert Sky Blockbuster Pavilion in San Bernadino, California. I remember seeing acts like, my then favorite, Terri Clark, Mindy McCready, and both Tim McGraw and Faith Hill. Although being such a youngster at that show, I eventually fell asleep even before Strait hit the stage. I’m pretty sure my mom still has a KFROG bumper sticker from the show as well as a t-shirt. Another time I remember was when he first brought the tour to Tempe’s ASU Stadium. It was one of those rare days when it decided to rain nearly all day, but we stayed throughout the entire show. I specifically remember going to see two of the openers Lila McCann and Lee Ann Womack. I will always remember that Womack opened her set with her hit “You’ve Got to Talk to Me” and singing along with Lila’s “I Wanna Fall in Love” and “Yippy Kay Yay.”

The last time the festival hit Arizona was probably the best because we got to ride in a limo to the show (don’t ask me why we did that). Thinking about it now brings back a Pure Country related memory. My aunt recreated the moment when Lula pulls up to the bar after tracking Dusty down to bring him home in the limo. She pulls up, rolls the window down, looks at Wyatt and says “it’s time to come home Dusty.” If I remember correctly my uncle was recording our departure on his video camera so I’m sure there’s footage of that moment out there somewhere. But back to the show…I remember we got to see acts like the Dixie Chicks, Womack, Brad Paisley, Sara Evans, and Alan Jackson. My favorite part about that show was getting to sit with my cousin, brother, and his girlfriend. I always remember us complaining about how the couple in front of us were smoking and us obnoxiously coughing from the smoke.Plus I remember specific songs Strait performed like “Meanwhile,” “Write This Down,” and his duet with Alan Jackson, “Murder on Music Row.” The show also created a bitter memory because my mom got to sit on the floor within the first 20 rows while we were stuck in the bleachers! But all in all, it was a great night!

As I write these features you’ll notice how most of these memories are recollections of moments I’ve created with family. My family is the single biggest thing in my life and I love them all to death and I would be nothing without them. Even my musical taste wouldn’t be what it is today if it weren’t for everything they taught me. That’s why I love to listen to older music because it brings back those moments of my life that I cherish. Another example is how George always reminds me of my late great-grandmother who was head-over-heels in love with him. When she would visit, she would always ask to sleep with the George Strait blanket and would always hint at how she wanted one. So one year for Christmas, we bought her one. I will always remember the big smile she had on that Christmas day when she opened it. Every time we went up north to visit her, we could always find that blanket on her bed.

I could literally ramble on and on about George Strait related memories, but I think I’ve shared the best ones. The conclusion is basically George Strait has always been a rather big part in creating memories and shaping my musical taste. So, thank you Mr. Strait! Trust me, these features will get way more interesting as I begin to really dive into my earlier country music memories and influences. I’m already thinking about some of my most embarrassing stories that I’m ready to share!

Filed under Editorials, Me and Country Music

3 responses to “Me and Country Music: George Strait”