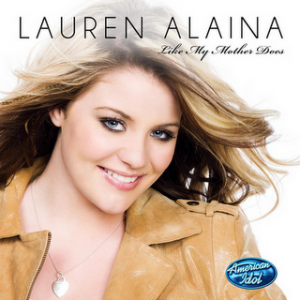 The best part about this year’s American Idol finale is the fact that country music is gaining two fantastic artists and vocalists. Of course we know that winner Scotty McCreery will be hitting the country scene with his debut single but this year’s runner-up will also do the same. Is Lauren Alaina’s “Like My Mother Does” the perfect song to launch her onto the country charts?

Throughout this season of the hit talent competition, Lauren Alaina has showed that her true passion is for country music, more specifically the current mainstream country which consists of mostly pop productions. She’s said that some of her Idols are veterans of the pop-country field like Carrie Underwood, Shania Twain, and Reba. So it’s no surprise that Lauren’s debut single fits her roots as a country-pop vocalist.

Just like with Scotty’s debut single, I feared that Lauren was going to get stuck with a strictly pop single that doesn’t come close to sticking to her country roots. But, just like he did with Scotty’s single, Iovine managed to find a song that suited Lauren perfectly.

The production on “Like My Mother Does” is very “full,” to say the least. Everything from acoustic, electric, and steel guitars to a string backing are used in this full-blown country-pop power ballad. The over-the-top production resembles something you’d hear from country-pop veterans like Rascal Flatts and Taylor Swift. When the song hits the bridge and the final verses it’s extremely loud and almost unbearable. The unfortunate part is that because the production is so loud Lauren’s vocal track has to be even louder so it can be audible.

What I like about this song is the fact that Lauren is able to show off her complete vocal range. She offers a tender vocal performance during the song’s verses and then she attacks her higher register full on during the chorus and the song’s bridge and final chorus. Jimmy Iovine picked a great song that allowed Lauren to deliver her best performance of the entire season during Tuesday night’s performance show.

The song is another example of a cheesy, sappy song that is written especially for the Idol winner (reference my review of Scotty’s song for the full description). However this one isn’t about living in the moment or another cliche love song; instead, it’s an ode to the mother who has set an example for her daughter to live up to. “When I love I give it all I got like my mother does, when I’m scared I bow my head and pray like my mother does…” the lyrics of the chorus show off how the narrator is following in her mother’s foot steps. It’s one of the most unique Idol winner singles and could rank right up there with Kelly Clarkson’s “A Moment Like This” as one of the best winner’s singles.

With this song, Lauren Alaina proves that she can be a great storyteller. She delivers the song with such raw emotion and heart that it almost brings you to tears. That quality is what will separate Lauren from the other female vocalists in country music. If she plays her cards right and picks the best songs then she’ll definitely have a lucrative career in country music. I’m giving Scotty a pass with his first single because it wasn’t chosen by him so I’m doing the same for miss Lauren Alaina. She’s better than this song and I hope she gets to record better songs to match her incredible talent.