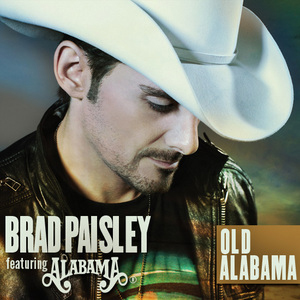 With “This Is Country Music” hitting the roadblock that is Jason Aldean and Kelly Clarkson’s “Don’t You Wanna Stay,” Brad Paisley is hoping his newest single will take him back to the top of the singles chart. Does “Old Alabama” have what it takes to do what “This is Country Music” couldn’t?

So from a production stand point I think Brad Paisley’s upcoming album, This is Country Music, could be fantastic judging by the production of the album’s first two singles. On “This is Country Music,” Brad utilizes a fantastic production that involves plenty of banjo, fiddle and steel guitar. On the album’s second single, “Old Alabama,” Brad takes a page out of country super-group Alabama’s playbook and conjures up a fun, upbeat, country production. The song is filled with lots of electric guitar (as usual with a Paisley song) as well as some fantastic fiddle breakdowns and incredible steel guitar riffs. It’ll be easy to see plenty of country music fans blaring this song during backyard barbeques because of its fun and free production, which is why it could climb to number one.

Once again Brad delivers a solid vocal performance that includes plenty of energy and personality that’s needed to match the fantastic production. The song even features a cameo from Alabama themselves which adds value to the song as a whole (as well as increases the chances of being nominated for a vocal event award during awards season).

Unfortunately, the song misses the mark with its lyrics. In an attempt to pay tribute to Alabama, the song revolves around the “story” (I use that term lightly because it’s hardly a story) about how a girl’s idea of a good time is listening to “old Alabama” songs. With lines like “…with her windows rolled down and her hair all blown around she’s a hot southern mess” and “we’ll find a hideaway wher she and I can play in mother nature’s band,” it’s obvious the song’s lyrics are nothing special. There is, however, a slight positive when it comes to the lyrics and thats the cleverness of how there are Alabama song titles thrown in. “A little dixieland delight at the right time of the night and she can’t keep her hands off me” is probably one of the most clever lines of the song. Other than that the song falls way flat in paying tribute to the greatest group in country music.

I’m a little disappointed that the reigning CMA Entertainer of the Year has taken a step backwards when it comes to the artistry of his music. Let’s hope that the other 10 or so songs on This is Country Music are a far better representation of the artist that Brad Paisley is.