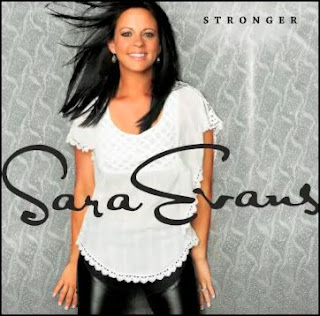 On this week’s Billboard country charts we see the debut of Sara Evans’ newest album, Stronger. Where did Sara debut in her first week out? Find out in this week’s Chart Flash along with how Jason Aldean and Kelly Clarkson faired on the singles chart.

Just as expected, Sara Evans’ Stronger debuts atop the Country Albums chart this week with sales of just over 55,000 copies. This is Sara’s second album to hit number one, she claimed the top spot with her last album, Real Fine Place. Holding steady at number two is Jason Aldean’s My Kinda Party which inches closer and closer to the 1 million copies sold mark. In third this week is Lady Antebellum’s monster album, Need You Now, while Aaron Lewis’ Town Line falls to fourth. Rounding out the top five selling albums is Rascal Flatts with their album, Nothing Like This.

Over on the Hot Country Songs chart, Jason Aldean and Kelly Clarkson’s monster ballad, “Don’t You Wanna Stay,” stays put atop the chart for a third week in a row. Climbing up one spot to number two is Billy Currington with his latest hit, “Let Me Down Easy.” Also making a one spot move up is Thompson Square whose debut smash single, “Are You Gonna Kiss Me or Not?,” lands at number three. After playing bridesmaid to Jason and Kelly for the past few weeks, Brad Paisley’s “This is Country Music” falls two spots to number four. The Zac Brown Band’s “Colder Weather” makes a three spot leap to round out the top five songs in the country.

With no big releases to report in next week’s Flash, there’s a strong possibility that Sara could hold on to the top spot unless Jason Aldean experiences a sales increase to overtake her.

Only two songs made their debut this week and they are led by Brad Paisley’s newest single, “Old Alabama,” which lands at number 44. This week’s other debut song belongs to Gloriana whose “Wanna Take You Home” comes in at number 56.

With Thompson Sqare and Billy Currington experiencing major radio airplay, it’ll be interesting to see if Jason Aldean and Kelly Clarkson can hold on to the top spot for a fourth week in a row. As usual, we’ll sort out all the movement in next week’s Chart Flash.