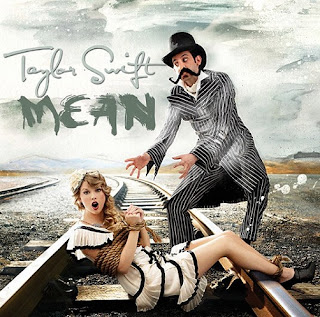 Aftering scoring top five hits with “Mine” and “Back to December,” Taylor Swift is releasing her third single off her Speak Now album. Taylor is hitting country radio with “Mean.” Is this song a potential critical darling or just another piece of Swift ear-candy?

Congratulations Taylor Swift…you are finally winning this music critic over.

After releasing such adolescent themed songs like “Our Song,” “Picture to Burn,” and “You Belong With Me,” Taylor Swift is finally releasing a song that can reach an audience beyond the tween girls who have supported the country starlet from the beginning of her career. “Mean” deals with the universal theme of being disrespected by cruel, mean people in the world, something nearly everyone deals with in life. We’ve all had those instances whether it be being made fun of in high school or taunted and disrespected by random people on the street, we’ve all had our run-ins with mean people.

Well it’s no secret that the mean people Taylor Swift has had to deal with throughout her career are those pesky music critics. Whether Taylor’s delivering a shaky, off-key performance on an awards show to winning the CMA Entertainer of the Year award, she’s had to deal with critics bashing her about her voice and her credibility as an entertainer. Well those critics are being dealt the same fate as ex-boyfriends and anyone who has done Swift wrong and that fate is being the subject of one of the singer’s songs, and she doesn’t hold back.

“You with your words like knives and swords and weapons that you use against me/you have knocked me off my feet again got me feeling like I’m nothing.” The opening lines of “Mean” are so direct that there’s no doubt who Taylor is singing about. The song continues to offer images of what those words have done to her including the following line: “I’ll walk with my head down trying to block you out ’cause I’ll never impress you.” “And I can see you years from now in a bar, talking over a football game…drunk and grumbling on about how I can’t sing,” Taylor sings as she talks directly to her “haters.” Lyrically this is probably the most creative song she’s penned and is without a doubt one of her best singles to date.

The production is surprisingly filled with banjo, fiddle, and mandolin that gives it a country, bluegrass, acoustic feel that suits the song and Taylor’s soft vocal performance brilliantly. This is her most country sounding single to date and is definitely a stand out in a catalog that’s filled with plenty of pop songs. Like I said earlier, after three albums and countless songs about teenage issues, Taylor Swift is finally starting to make a fan out of me. I tip my hat to you Taylor.