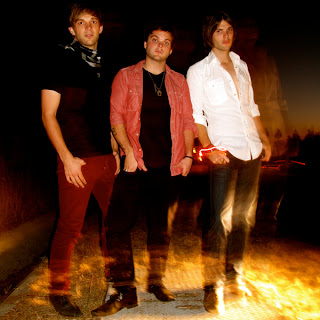 A couple weeks ago we introduced a California trio of brothers called The Welch Brothers in the first installment of our Indie Spotlight. Now, we’re offering a song-by-song review of their first EP, God Bless California.

The EP contains four original songs recorded by The Welch Brothers and produced by Colby Wedgeworth. Once again the group calls themselves “California Country” which is a mixture of country, pop, and alternative genres of music all rolled up into one and these four songs show the group’s diversity and unique style of country music.

Head on Collision
This is a more rock-leaning song as the production is filled with plenty of loud drums and guitars…the usual ingredients needed for a rock song. The song’s lyrics use an automobile accident as a metaphor for a failed relationship, something I found rather interesting. “I hold my breath as we cross another double line…head on collision” sings the narrator about how relationships are rarely as smooth as a Sunday afternoon drive. The vocals, from what could be heard, are fantastic and show off the Welch Brothers’ tight harmonies. This is definitely the least country sounding song of the four, but it still shows off the trio in a fantastic light.
Rock’N’Roll and Rainy Days
This song begins with a fantastic acoustic guitar intro while the lead vocals kick in. The acoustic guitar is then joined by a fantastic steel line and a nice pop-bluegrass beat that makes this one of my favorite songs on the EP from a production stand point. The production quickly turns into a country-pop flavored one during the chorus and goes right back to the bluegrass during the verses. Normally I wouldn’t approve of the roller coaster effect when it comes to production but I actually like it here. The song finds the group singing about how if any future love interests want a guy who doesn’t have any dreams or aspirations, then they can find him elsewhere. The group mainly sings about how a guy has a dream of becoming a recording artist and is happy singing in the subway for tips rather than having a real job.
God Bless California
If there was any doubt whether or not this trio is proud of where they come from, then this song proves the doubters wrong. “God Bless California” is an ode to the state where the trio hails from. The brothers sing about how California doesn’t compare to the likes of Paris and the pyramids of Egypt. “God bless California ‘cause California you blessed me” sings the group as they pay homage to the state. This is a great song which is made even greater with the production which consists of a simple mixture of guitars and fiddle. The group seems to pour every ounce of heart and soul into their vocal performance on this song, which makes it the best out of the four on the EP.
Just Listen
In our interview with the guys, they listed Taylor Swift as one of their musical influences and this song has a big of Taylor’s pop-country flare in it. From the guitar line to the pop drum beat, this song is very mainstream and could possibly compete with the mainstream sounds being currently heard on country radio. The lyrics musical terms as metaphors (“life is a song…the world is a record that keeps on spinning, so live, laugh, and just listen”) to convey the message of enjoying life. Once again the group provides an interesting take on a common country music theme.

Overall this is a solid introduction to The Welch Brothers and I think they’ll continue to grow and evolve with their sound as they get the opportunity to write and record more music. I’ve said before that this trio brings a different style and sound to the genre of country music that should be heard by many people. I’ve enjoyed listening to these four songs and I look forward to getting to hear more from this talented group of brothers.