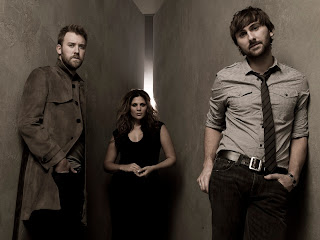 This week’s charts saw five-time Grammy award winner Lady Antebellum experience a 205% increase to land at number one on the Country Albums chart once again. Meanwhile, this week also saw a new song reach the top of the Hot Country Songs chart. Find out who was able to replace Luke Bryan’s “Someone Else Calling You Baby” in this week’s Chart Flash.

Lady Antebellum’s Grammy award winning album, Need You Now, sold over 85,000 copies this week to land at number one on the Country Albums chart. Following Lady A is Taylor Swift’s Speak Now which moved just over 30,500 copies to land at number two. Meanwhile Jason Aldean continues to move over 30,300 copies to come in at number three. Coming in at number four is another Grammy winner with the Zac Brown Band’s You Get What You Give. Rounding out the top five is yet another 2011 Grammy winner, Miranda Lambert with her album, Revolution.

On the Hot Country Songs chart, Blake Shelton nabs his third consecutive number one single as “Who Are You When I’m Not Looking?” climbs to the top spot. Making a four spot leap to number two is Jason Aldean and Kelly Clarkson’s duet, “Don’t You Wanna Stay,” which looks to be next week’s number one. Moving up two spots to number three is Brad Paisley’s “This Is Country Music,” while Luke Bryan’s “Someone Else Calling You Baby” falls three spots to number four this week. Rounding out the top five songs is Taylor Swift with her latest smash, “Back to December.”

Leading this week’s debut songs is the newly crowned ACM Top New Solo Vocalist, Eric Church’s “Homeboy” which bows in at no. 48. Following Church is Eli Young Band’s “Crazy Girl” at no. 51, Toby Keith’s “Somewhere Else” at no. 57, and Frankie Ballard’s “A Buncha Girls” at no. 59.

Next we’ll see if Jason Aldean and Kelly Clarkson can make it to the top of the Hot Country Songs chart or if Blake Shelton can hold them off for at least another week. On the albums chart, we’ll see if Lady Antebellum can continue to ride the Grammy wave or if someone else will replace Need You Now as the top country album in the land. As usual, you can find out in next week’s Chart Flash!