Talkin’ About the Grammy’s: Country Music’s 2010 Summed Up in Three Words 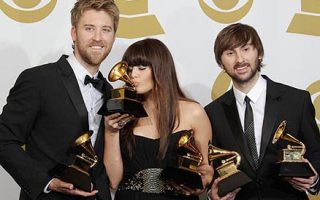 Sunday night’s 53rd Annual Grammy awards proved that 2010 was undoubtedly the year of the lady…Lady Antebellum that is. The country trio owned the night with five, out of a possible six, wins including awards for Song of the Year and Record of the Year. Find out what else Lady A took home as well as which other country artists received Grammys.

If we weren’t sure how to sum up the year 2010 in country music, then last night’s Grammys did for it us by using three simple words: “Need You Now.” The smash hit from Lady Antebellum claimed the all-genre Song of the Year and Record of the Year awards, beating favorites by Eminem, Cee Lo Green, and Jay-Z. In addition to those, the group also walked away with their second Best Country Vocal Performance by a Duo or Group trophy as they won for “Need You Now.” The smash also claimed Best Country Song honors while the group’s sophomore album, Need You Now, took home the Country Album of the Year award. The only award the group failed to win was the Album of the Year award which went to rock’s Arcade Fire for their album The Suburbs.

In other country categories, Miranda Lambert became a first time Grammy winner as she took home the Best Female Country Vocal Performance award for her brilliant performance of “The House That Built Me.” Keith Urban also nabbed his fourth Grammy by taking home the Best Male Country Vocal Performance for his hit “‘Til Summer Comes Around.” The Zac Brown Band also took home an award as their collaboration with Alan Jackson, “As She’s Walking Away,” upset favorite “Hillbilly Bone” for the Best Country Collaboration with Vocals award.

During the telecast, country was represented well with performances from Lambert and Lady A as well as Keith Urban, John Mayer, and Norah Jones offering a snippet of Dolly Parton’s “Jolene” to honor the Grammy Lifetime Acheivement Award recipient. Martina McBride was also featured in an all-star tribute to Aretha Franklin. That’s a wrap on this year’s Grammy awards! We’ll be talking more about awards shows when this year’s ACM’s approach.