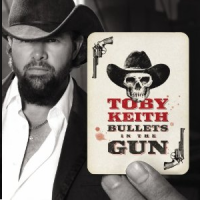 As predicted, this week saw Toby Keith’s recent album, Bullets in the Gun, debut at number one on both the Country Albums chart and the all-genre Billboard 200 chart. The big news belongs to this week’s Hot Country Songs chart which sees a new number one after Kenny Chesney’s “The Boys of Fall” vacates the top spot. Who replaced Chesney atop the chart? Keep reading to find out!
Toby Keith’s Bullets in the Gun opened with a modest 70,800 copies which was enough to debut atop the Country Albums chart as well as the Billboard 200 chart. Sliding down the number two is last week’s number one album, Hemmingway’s Whiskey by Kenny Chesney, while the Zac Brown Band’s You Get What You Give also slides down a notch to number three. Coming in at number four is Jamey Johnson’s The Guitar Song. Rounding out the top five country albums is Billy Currington’s latest studio effort, Enjoy Yourself. It should be interesting to see how this chart looks next week with the debuts of Darius Rucker’s sophmore country album as well as the debut album from The Band Perry.

Over on the Hot Country Songs chart, Josh Turner claims his second straight number one song as “All Over Me” rises up one spot this week to the chart’s summit. Right behind Turner is Easton Corbin’s “Roll With It” which leaps up two spots to the number two spot this week. Holding steady at number three is Darius Rucker’s “Come Back Song” while last week’s number one, Kenny Chesney’s “The Boys of Fall,” slides down three spots to number four. Rounding out the top five for a second week in a row is Sugarland’s “Stuck Like Glue.”

Leading this week’s debut singles is the LoCash Cowboys’ “Keep In Mind” which bows in at no. 50. Following the cowboys are Troy Olsen’s “Good Hands” (no. 53), Randy Houser’s “A Man Like Me” (no. 59), and Taylor Swift’s “Speak Now” (no. 60). This week’s greatest gainer is the latest from Lady Antebellum, “Hello World,” which jumps up 9 spots to the number 31 spot this week.

Next week holds a couple storylines as Darius Rucker will try to debut at number one with his sophomore album while The Band Perry hopes to have a decent first week. On the singles chart, Easton Corbin continues to “Roll” up the chart but can he land at number one or will he be held off by Turner’s “All Over Me.” Find out what happens on the charts in next week’s Chart Flash!