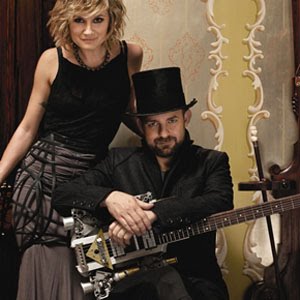 Over the last year, the once unstoppable duo of Jennifer Nettles and Kristian Bush – otherwise known as Sugarland – has been fairly inactive. So inactive that they lost the Duo of the Year award at this year’s ACM awards ceremony. Hoping to reemerge as country’s leading duo, Sugarland has released its first single from its upcoming album, The Incredible Machine. Is “Stuck Like Glue” the single that will help Sugarland regain its superstar status?

I’ve always thought that Sugarland is one of those few artists who know how to do country-pop the way it’s supposed to be done. Their last album, Love on the Inside, was the duo’s strongest album to date and included plenty of brilliant country-pop songs. That’s why it comes as no surprise that the duo’s upcoming album, The Incredible Machine, has been billed as a pop flavored album. Based on the lead single, “Stuck Like Glue,” the album could be a critical darling.

“Stuck Like Glue” infuses all of Sugarland’s signature sounds from the mandolin to the accordian to create an incredibly catchy pop production that accompanies the most infectious melody the duo has delivered since “All I Want to Do.” The lyrics, which aren’t the greatest to come the duo, are filled with plenty of line repetitions in the chorus and a catchy “woah oh woah oh” hook that is instantly stuck in your head from the first time you hear it. The most jaw-dropping part of the song is its bridge which finds Jennifer Nettles dabbling in a brilliant reggae-rap which only adds to the overall light heartedness of the song.

Some people may listen to this song and say that a production this upbeat and light hearted shouldn’t, and may not, work. However, I think what makes it “work” is Jennifer’s fantastic vocal performance. What I think has been lacking in some of the duo’s studio recordings is the energy and fun that Nettles delivers in live performances. For the first time I think Nettles nails that energy on “Glue” and shows how much fun she’s having during the performance.

With “Stuck Like Glue,” Sugarland proves that they aren’t afraid to push the boundaries with their creative stylings. If this is just a taste of what The Incredible Machine has to offer, then I’m ready for more.