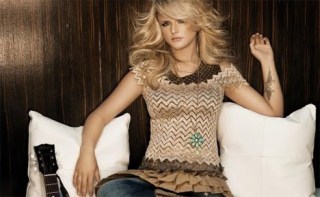 With her brilliant single, “The House That Built Me,” spending four weeks at number one, Miranda Lambert is releasing her fourth single from her ACM award-winning album, Revolution. Is the rowdy anthem “Only Prettier” good enough to extend Lambert’s streak of number ones to three in a row?

Written by Miranda Lambert and Natalie Hemby, “Only Prettier” is a twang-filled, southern rocker that finds Lambert singing about the comparison between charmful southern girls and those girls that are not so charmful. The song opens with a twangy guitar hook, which unfortunately, is the production’s highlight. Once the vocals kick in so does a wild production which includes blaring guitars that all but drown out the steel guitar riffs and Lambert’s vocal performance.

That said vocal performance has what it takes to be one of Miranda’s finest had it been paired with a lighter production. However, she is still able to deliver the song with plenty of her signature sass and tough girl attitude.

Overall, the song is saved by the songwriting which is done brilliantly. From the opening verse about Miranda having a “mouth like a sailor” while other girls are “more like a Hallmark card” to the catchy chorus about the two cliques reaching across party lines and shaking hands. Though the entire song is brilliantly written, its the last couple of lines in the chorus that I personally love: “…we got a lot a common you will see/we’re just like you/only prettier.”

This is a fantastic follow-up to the sure to be award-winning “The House That Built Me.” Not only does it stick true to Miranda’s views as an artist, but it once again shows her willingness to take risks with her song choices. Unlike most country artists who choose to release more “radio-friendly” songs over their finest work, Miranda keeps going against the trend and releasing brilliant tracks from Revolution. I believe this will be another smash hit from Miranda and could possibly all but wrap up the Female Vocalist award at this fall’s CMA awards.

One response to “Miranda Lambert, "Only Prettier"”